If you're looking for a home digital piano with all the 'bells and whistles', the beautiful Yamaha Arius YDP-V240 may just be the right choice for you. A lot of digital pianos, (even some in the Arius series, for instance, like the Arius YDP-162 and YDP-142) place emphasis mainly on the piano voice and a few additional voices, and have very few features. But not this one. This one has a host of features that we shall talk about, in addition to its main piano sound. 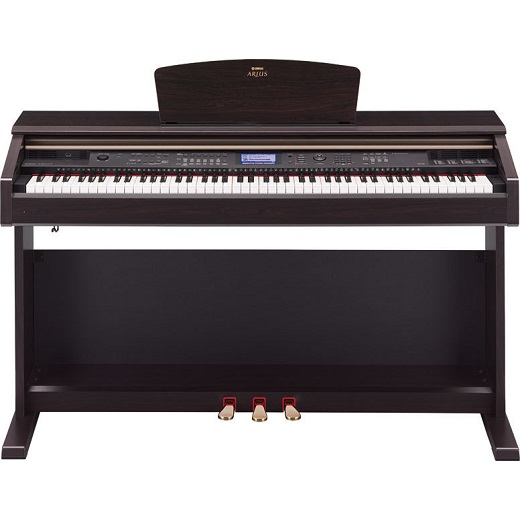 My guess is that Yamaha would improve the piano voice on this new digital piano. But this is just the way I see it. You can listen to how the piano sounds in the video below and decide for yourself if it's worth the plunge. If you can't wait, by all means buy a YDP V240. You may want to read other reviews to hear what others have to say.

The Yamaha YDP V240 sells for $1999.99 on the internet. Why does it sell for so much while the Yamaha DGX640 sells for only $699? They're more or less the same in terms of controls, sounds, and electronics . This is one of the things you have to be mindful of when buying a digital piano. Firstly, the DGX640 has been discounted to make way for the new model. But most importantly, what makes the Yamaha Arius V240 more  expensive is its furniture cabinet and its better speaker system. The DGX-640 is portable while the other is not. If you care for that piano-like cabinet and you've got the money, if you care about how the instrument looks and fits in your home, the Yamaha YDP V240 is the way to go. If you want a better speaker system, go for it. But keep in mind that if you don't care so much about looks, there's a less expensive alternative.

How about the action? The Arius V240 comes with Yamaha's Graded Hammer Standard (GHS) weighted action. Just like a traditional piano, the keys of the lower notes have a heavier touch, while the higher ones are more responsive to lighter playing. But bear in mind that digital pianos like the Yamaha YDP-162 come with the better Graded Standard (GH) action.  Graded Hammer is weighted much more like an acoustic piano and is also more solid and less noisy.

As mentioned earlier, where the Yamaha Arius YDP-V240 beats a lot of digital pianos like the YDP-142 and YDP-162 for instance, is with respect to its host of great features. For instance the V240 has a total of 492 voices while leading digital pianos have as few as 10. It features Yamaha's highly acclaimed Sweet! and Cool! Voices  which deliver natural and very dynamic sound. There are over 200 DSP effects including reverb and chorus. This digital piano even comes with the Yamaha Education Suite, a feature that teaches you how to play the piano.

- 2 headphone jacks for rehearsing with a teacher or duet partner

Here's a review sent by a website visitor about the Arius YDP-V240. You can also read various comments. Go here to learn more about the Yamaha YDP V240, read additional reviews or make a purchase if you see it fit.