Let's take a look at the Yamaha MX series. If you want the sounds of the Yamaha Motif XS but you're on a budget, the Yamaha MX is worth checking out. This series of keyboards comes with over 1000 sounds from the famous Motif XS series. Everything from realistic acoustic piano sounds, electric pianos, guitars, brass, strings and drums to complex 8-element synth sounds is built into the MX series for a small fraction of the cost of the XS.  You just can't go wrong. The savings are enormous and you still get the same quality sounds that the Motif is known for. The Yamaha MX49 sells for $499.99 while the Yamaha MX61 sells for $699.99. They are really identical keyboards except for the number of keys. The MX49 has 49 keys while the MX61 has 61.

If you're using this keyboard mainly in studio or if it's not the main keyboard in your rig, I think you should save the extra $200 and buy the cheaper model, the MX49. If you're using it as a main board for live playing, you will need more keys, but otherwise it's pointless spending the extra money for basically the same instrument. I don't understand why they are charging as much as 200 bucks more just for more keys but having said that, since it's such a quality instrument, you will be satisfied.

I love how easy it is to combine voices on the Motif XS keyboards. You can layer or split voices while playing or you can do this beforehand, save the settings and recall them instantly. The ability to edit voices and performances and save them for fast recall is one of the best features on this keyboard. Each voice has its own intelligent arpeggiator and a dedicated Part for a drum track, making you sound like you're being backed by an entire band.

The Yamaha MX49 and Yamaha MX61 each feature 128 performances, all editable. There's a total of 16-multi-timbral parts for  each performance. The keyboard features 128 notes of polyphony, so you won't have to worry about notes cutting off even with the densest sequences from your DAW.

I'm quite pleased with the USB connectivity on the MX49 and MX61. I find it very simple to operate, and have no issues at all.

One thing I really like about this series of keyboards is the fact that one can record its internal sounds directly to the computer. There's no need to go the analog route, therefore you get the highest sound quality possible. You can control internal sounds, DAW parameters and VST instruments via the knobs and buttons of your MX. This hands-on control is truly impressive. 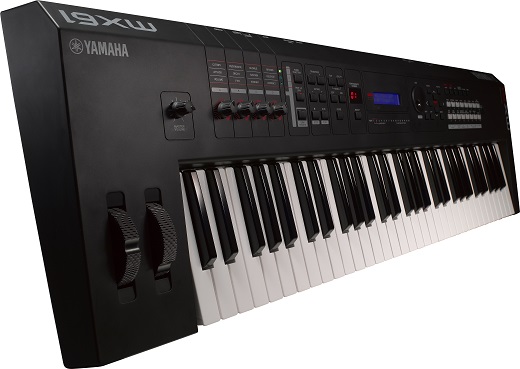 The keyboard comes with a complete suite of music production software. Included in your package is Steinberg Cubase AI which features 48 audio tracks and 64 MIDI tracks, notation and built-in VST effects, allowing you to do complete productions. In addition the keyboard comes with compelling VSTs to get you started,  namely, Steinberg Prologue and the Yamaha YC-3B organ emulator.

One of the the few things I don't like about this keyboard is its all plastic construction. Also, I'm not a fan of is the way the keys are made. But the positive out of this is the fact that it's so light and great for gigging. No need to carry a heavy 60 pound instrument around. The Yamaha MX49 weighs only 3.8kg while the Yamaha MX61 weighs 4.8kg. You can easily carry each one with one hand. I don't think this keyboard will break unless you abuse it.

I love the fact that the keyboard comes with a USB to Device port. It's great for storing MX data to external memory , as well as playing wave files directly from a USB stick. Also, you can play an MP3 player, tablet or iPod through your keyboard. You can connect to the AUX input using a mini stereo cable.